Lolita 52: Predict the next lolita trend!

Haha well…I’ve already posted about this. But, if I were to focus on one single thing that I really do think will be a trend it will be the rise of casual, or perhaps more correctly, simple lolita.

I think we’re all getting a little over the OTT trend. It’s fantastic, don’t get me wrong, and there have been so many amazing outfits with impressive detail and styling overall. It’s amazing. But it’s tiring. So I think the next thing we’re going to see a lot of is simple lolita outfits; not casual jfashion, not otome, but just simple lolita coordinates. Dresses or skirts will become the focal point of outfits rather than just a part of a grand whole, cutsews will be on the rise, unassuming natural hairstyles will come to the fore, and the fashion will return, at least a little, to its street fashion roots. 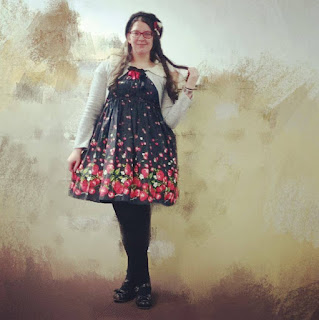 One of my casual work outfits from this year.

To be honest, this tends to be how I wear lolita most myself. And I suppose nearly anyone wearing lolita for a “daily” purpose does the same, though some I’m sure do dress to the nines! I certainly pull out all the stops for photoshoots, but not if I’m just wearing lolita out and about.

I suppose, in the end, this actually comes down to a question of image sharing, rather than necessarily a fashion trend. Or, more technical, it’s a trend in subcultural behaviour rather than a trend in outfit coordination. But a trend is a trend, and this is the one that I think is going to happen next.
Posted by Roli at 3:02 pm