I received some money for Christmas and of course, I spent it on lolita because what else? I actually ordered this before Christmas though, because Lolita Desu was offering 10% off their lucky packs until Christmas.

Now, a little bit of backstory. I've been aware of the Lolita Desu lucky packs for a while, and reviews are all positive, but I've never really seriously considered getting one. This year I was hoping to buy a lucky pack around Christmas. But I didn't like any of the special sets, and didn't want to get a Metamorphose skirt pack because I really don't want more skirts, so I was left wanting to buy some kind of lolita surprise and not having any options. Then, like a sign from above, in the lucky pack thread on CGL someone shared the contents of an XXL pack they ordered, and I was impressed. So I decided to just go for it.

I ordered a Large/Big pack on 24/12, which after the discount was listed on their site as $301AUD. However, the site is in USD so even though it converted to AUD I still got charged at the PayPal conversion rate when checking out so it was actually $312 - just something for non-US currency users to be aware of! I chose the free shipping which was an option since it cost over $150. I knew they were closed until 30/12, and their website specifies an average of 2-4 weeks to make up a pack, so I was not expecting it until late January at the earliest.

However, February rolled around without my order status changing from Awaiting Fulfilment so on the 2nd I went onto my account to send a message to make sure my order hadn't somehow slipped through the cracks. But then I saw that status was now Awaiting Shipment and then later that day I got an email with a tracking number. So they did put the pack together within their 2-4 week time frame.

The pack arrived on 10 February. Their free airmail shipping is stated to arrive in 5-15 days, and generally shipping to Australia from Japan isn't so bad, so I was expecting it on the early side of the time scale and it was. The only thing was the tracking never updated after it left Japan, so when I got a text from James while I was at work saying it had arrived it was a real surprise! So that was the ordering process ^__^

For those who don't know, Lolita Desu lucky packs come in four sizes, and you can specify what you do and don't want to receive as well as your sizing. They don't guarantee they'll give you the things that you want, but do guarantee items will fit the given measurements and will not be the items or colours you'd specified you didn't want. Which I think is pretty fantastic, to be honest, because you can get the surprise of a blind bag without any major disappointment.

I gave fairly broad specifications of what I wanted because I don't have a single theme going on in my wardrobe. In summary I asked for:
That's a lot of details, I know. I'd be curious to know how specific or not other customers are. But anyway, enough rambling about the lead-up to the pack, here is the pack itself. As I said, I ordered a Large size pack, which is meant to include 4-9 items. And I lucked out on the quantity side because I got 11! 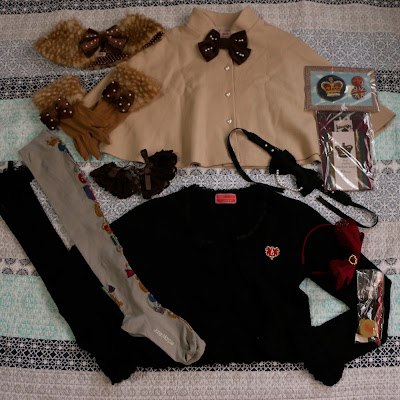 So my pack included:


I have to say when I opened the box and saw fawn fur I was super excited, and the cape is amazing! Here are a few closer pictures with more thoughts from me... 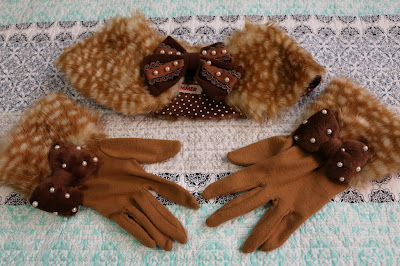 Firstly...the fawn fur! I have three collars now, which is kind of overkill, but they are all different in decoration colour and style. Also, the fur on this and my Peacockalorum ones are different too so you know... I don't have an obsession...

Anyhoo, the gloves are definitely a secondhand items as they feel a bit worn, but I love them! Such a quirky item and one that I would probably have never bought myself. 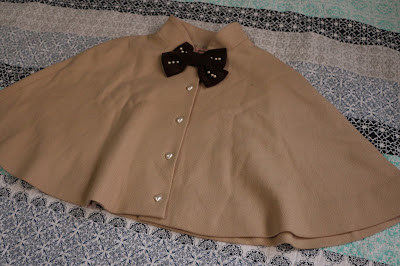 Speaking of things I'd never really buy this cape is another example. But it is so adorable and I'm really happy to have it! I am really excited to wear this when Autumn rolls around. 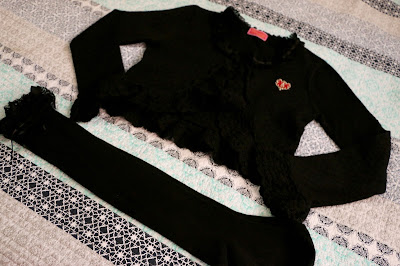 I over-brightened this photo a little to show the texture of the bolero - it makes me think of like 2010 era sweet, which is nice. Unfortunately it's a bit too tight on my arms at the moment, and I did provide my arm measurement because I know it's a problem sometimes. I'm not going to contact Lolita Desu about it through, even though from all I've heard they're great with replacing/refunding items that don't fit from their packs because I can't be bothered and I am trying to lose weight anyway. It does also seem to be missing the ribbon tie at the front, but I did say I was okay with missing pieces and that's an easy replacement to make. 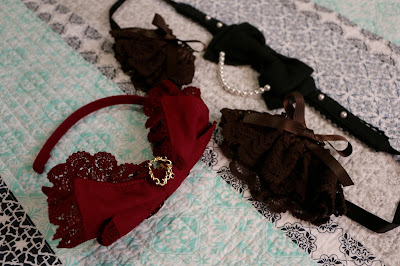 I have to say, first off...I love this headbow! It is so damn cute! And it looks good on me, which is impressive since I'm pretty picky with bows. The wristcuffs are also adorable and are in a colour that will be useful. The choker is cute too, but I won't wear it outside of photoshoots so I'm donating it to the model wardrobe. 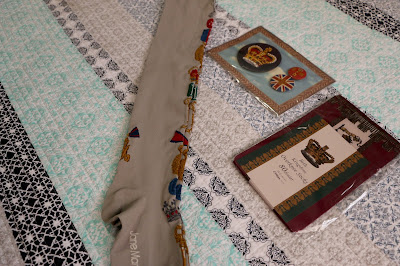 Now, to be honest, I was a bit baffled at getting these...honestly if I got anything themed I was expecting florals! But I suppose this does fit the theme of regimental stripes, even though I was thinking more of main pieces when I added that to my preferred themes. And I guess crowns/military is a very popular classic theme at the moment so these things would theoretically be a crowd pleaser...just not with me! But I have to say, other than these pieces Lolita Desu pretty much nailed it and besides, I'm planning to go to my comm's swap meet this month so I should be able to part with them there.

All in all I'm quite happy with this pack! If I'm to be completely honest yes, I'm a bit bummed about the crown items and also would have liked to have gotten a JSK or OP, but Lolita Desu certainly did ensure that I got a good range of items that fitted my requests. Most of all I'm impressed that they got me four items from my "hey, here are specific things I'm looking for list" - plain OTKS in black, long sleeved bolero in black, and not one but two fawn fur pieces. To me that's really going above and beyond what they guarantee they will do for these packs, and I'm pleased with that level of customer service.

I have to say, I won't do it regularly but I will probably order another pack from Lolita Desu in the future. I will be keeping six of the eleven items, including both large items, and now I know to be a little more specific in the preferences if I do order again. Overall though, I would definitely recommend a Lolita Desu lucky pack, especially if you have a large or varied wardrobe and want a fun surprise.
Posted by Roli at 12:01 pm