L325 outfits, or; An example of why solid-coloured pieces are awesome.

I'll start this post by saying I derped. I messed up. I made a mistake. Recently on a free weekend I took photos for several posts so I could fill up my blog schedule and I thought, "Hey, let's do an outfit post with my green Bodyline corset skirt". So I did. And then I realised I had already done that before I started my new job but had never posted them.

Therefore, this post features six outfits rather than my usual three. In each set I did a green/ivory and at least one green/pink or peach/brown outfit but I still wanted to share everything despite the repetition because it shows how you can make outfits subtly different even when you use a lot of the same pieces or colour schemes.

Firstly, let's have the original, forgotten three outfits then I'll follow up with the newer set. 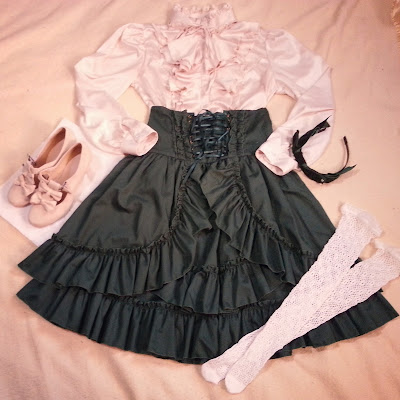 Looking back, I kind of consider this outfit a cheat. This blouse is shortly going to depart my wardrobe because it looks great in flat-lays, but not on me. Ever time I try it on I become more unhappy with it. But, on the plus side that headbow is perfect with this outfit, which is good because I bought it specifically to watch this skirt! 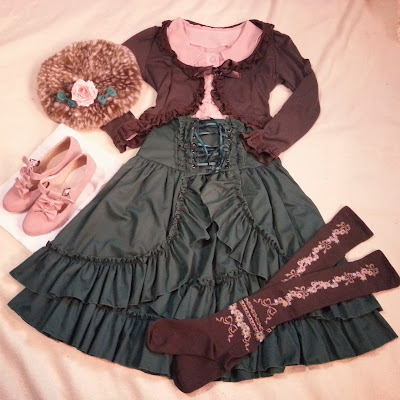 A warm, wintry outfit working with peach and dark brown. I have to say those Innocent World socks are one of my favourite pairs, they just work really well with so much of my wardrobe. 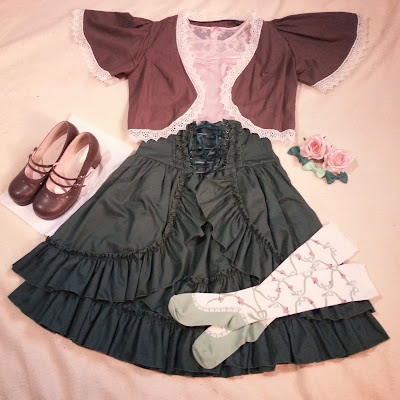 Following that, a more spring-appropriate outfit with similar pink and slightly lighter brown pieces. The paler (and shorter) socks and the ivory trim on the bolero make this a much more casual and lighter outfit overall, which I think is quite the accomplishment with a dark green skirt.

And now here are the second lot of outfits I made! 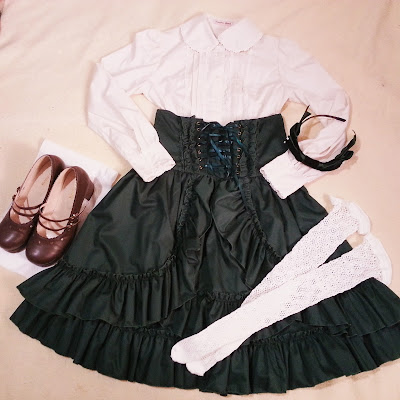 The first outfit of the second set really shows that I do approach pieces in similar ways... this is virtually identical to the first outfit of the first set! But ivory and dark green work well, though here I've used a nicer blouse and brown shoes. I'm a bit unsure about the shoes, but I wasn't feeling the ivory ones this time around and wanted something darker on the bottom. I think they work, but I don't usually go for non-matching shoes so it feels a bit weird to me. 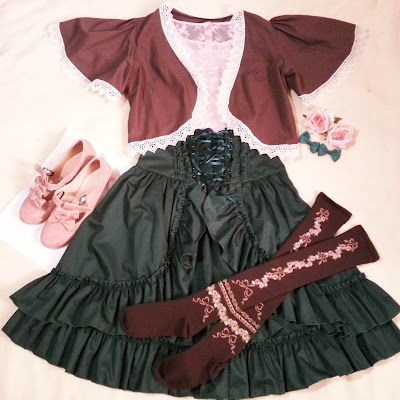 This outfit also look familiar, doesn't it? To be honest, I think I did the green/brown/pink or peach better in the first lot of outfits ^__^ Ah well, can't win everytime. 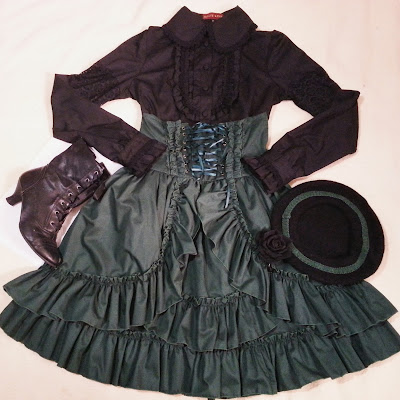 Lastly, a more gothic outfit! It's still classic, really, but it's about as far along the classic to gothic spectrum as I go. I trimmed that bolero with green braid specifically to match with this skirt and I really like this look. I'd wear it with black lace tights, which aren't in the picture because they look awful when they aren't worn.

So there you have it! An unusually long outfit post. Overall I have to say that L325 is one of my favourite pieces. Due to its unusual colour it's not the most versatile thing since it's a bit hard to match, but it's a fantastic piece and definitely one of Bodyline's best.
Posted by Roli at 4:05 pm