I used to use this blog for more personal posts as well as lolita, and I'm going to start doing that again a little because James and I are starting on a fitness bonanza as of today and I want to publicly record my progress because I think it keeps me a bit more accountable. I know for a fact I'm better at making healthy meals if I instagram them! So I figure a monthly re-cap of my achievements in the health-and-fitness world would probably be good as well. As I go on I may talk about my other goals, such as writing, but for now it's fitness time! 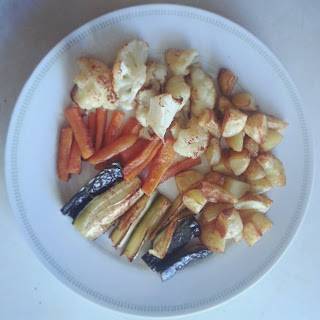 Mixed baked veges, one of my new-found favourites.

We laid some of the groundwork for the upcoming bonanza this last month. At the end of April we revamped our diet to focus on basically making sure we ate vegetables with every meal, and lots of them. It was great. I learned to adore eggs and baked cauliflower. Part of this was also swearing off fast food, which we did successfully and don't even miss. I also did push-ups and leg-lifts every day for three and a half weeks, upping how many I did by one each day. I only missed three days and went from being able to do one pathetic push-up to doing ten with good form in a set, which was a great improvement.

But I've been on a bit of an emotional rollercoaster, paired with the end of uni semester assignment rush, so we slipped up a bit on diet and I stopped my daily exercises. Still, it was a good start and now we're going into our bonanza.

I'm a funny person in that sometimes I need to take things slow and sometimes I need to go all-or-nothing, and our bonanza is going to be more of the latter. I'm aiming to do two each of leg day and arm day at the gym as well as going swimming twice a week. Diet-wise, we're going to basically go Paleo-ish [but with dairy!] six days a week and on Sunday, which is rest day, have a cheat meal/entire cheat day. Though I need to figure another term for it, because I hate the term "cheat" in regards to food and the implications it carries. We're also going to plan a week's worth of meals ahead and buy only what we need for it. I think this is going to work better for us than meal prepping did. Doing a big prep was great, but it just wasn't for us in the long run. I found I got to bored with the food and wanted fresh things instead of microwaved things.

This is going to be a pretty abrupt shift in both diet and exercise habits for me, but I think it'll be good. I've been down lately, and my increased size has not helped. I want to be fit and strong and be able to easily fit my lolita clothes and do all kinds of epic photoshoots that I'm not comfortable modelling for now. Swimming is on the agenda for a reason... I have a mermaid tail ^__^
Like, I actually do, I just never blogged about it.
Need to learn to swim in a monofin and then do cool photoshoots!

Basically, the goal of the two month long bonanza is to get some good habits underway before the next uni semester starts in two months and also in the process lose 8cm off my current bust and waist measurements [my hips don't ever want to go away, so I ignore them]. Given that my diet is currently not very good and my exercise is minimal, I don't think this is too much of a stretch. I'm not being too concerned about my weight, though I do want that to go down as well, because that will follow naturally. I've always felt measurements are a better thing to go off than weight because so many things can throw off the number on the scale. And I'm not just going to do two months then stop; I'm doing two months then evaluating my progress and my methods. 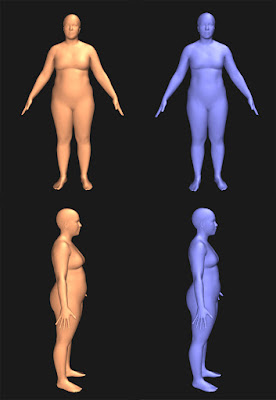 Left is current, right is goals for the end of July.

The thing I'm trying to keep in the front of my mind is that I've done this before. My typical measurements since my late teens was 102/82 on the bust/waist and at the beginning of last year I had gotten down to a 93/75. So this is achievable; I just want to achieve it in a more holistic, prepared way this time. Last time I tried getting fit I was jumping from idea to idea and I was definitely getting fitter [I could even do a pull-up, which is a goal I'm working towards achieving again] but as soon as life threw me a curveball I lost momentum and found it very hard to get it going again. This time I have what I think is a manageable but challenging plan and I'm committing to it for the next two months and then I'll go from there.

So at the start of every month, at least for a while, you're going to get one of these posts from me. I'll put my updated weight and measurements down and recap my achievements over the month. But don't worry! Most of my posts will still be about lolita ^__^

May Achievements:
1. Maintained almost daily exercises for over three weeks. Wasn't perfect or what I was completely aiming for but it was the first time I'd sustained momentum like that for a long time.
2. Can now do ten push ups [proper full ones, that is] in a row with good form, which is way up from one with bad form.
3. Did not have fast food at all.
Posted by Roli at 7:06 pm

Email ThisBlogThis!Share to TwitterShare to FacebookShare to Pinterest
Labels: health and fitness, personal