For a while, I've wanted to try doing a Project 333 style lolita capsule wardrobe. I even created one from my own clothes, but the photos turned out badly so I never posted it. Recently, I had the urge to experiment with this concept again, so here we are.

Project 333, if you haven't heard of it, it the idea that you have a wardrobe of only 33 items for 3 months, at which point you cycle out some items to suit your style and the change of seasons. These 33 items are meant to include everything but underwear, work-out specific clothes, and any items of sentimental jewellery, like a wedding ring, that you always wear.

For my lolita variant, I went with the following rules:

So I know it's not exactly Project 333 rules, but that gave me a good starting point to build a hypothetical capsule wardrobe, which you can see below. 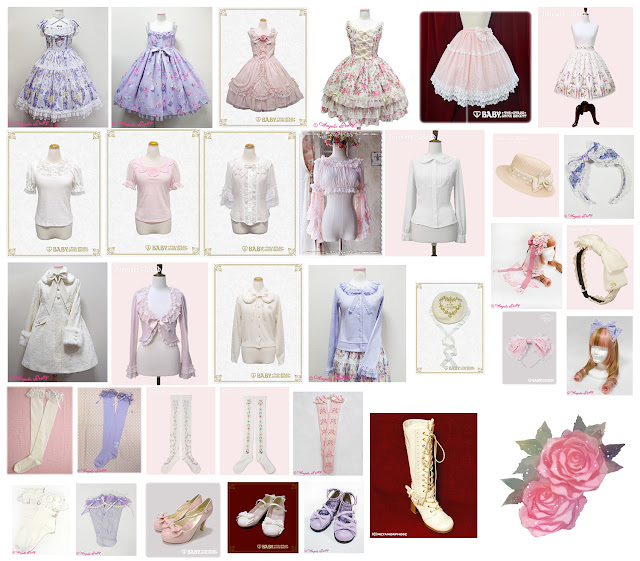 As you can see I ran with a pink, lavender and ivory colour palette in a floral theme, ending up with a very sweet-classic point. I chose main pieces that ranged from fancy to simple, and did the same with my collection of blouses, cutsews and outerwear. True to my usual stance on lolita wardrobes, I have focused more on having a variety of supplementary items rather than a large number of main pieces. I found it somewhat challenging to stick to a set number of pieces, and was constantly tweaking it - exchanging a blouse for a pair of shoes, for example. But in the end I feel like I came up with a very well rounded wardrobe which has a lot of coordination opportunities despite its small size.

To show this wardrobe in action, I've come up with four outfits for each main piece. 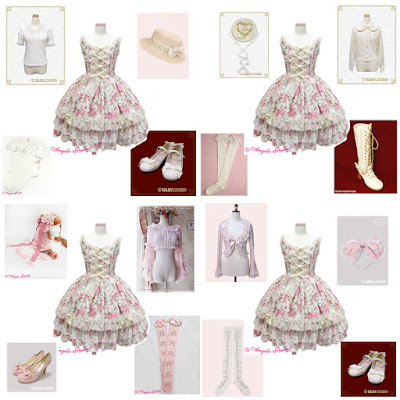 I'll admit, sometimes I like to live vicariously through hypothetical wardrobes because I adore Angelic Pretty florals but AP is too short for me! Here you can see both seasonal variations and outfits that show differing levels of fancy that could be achieved with this JSK. 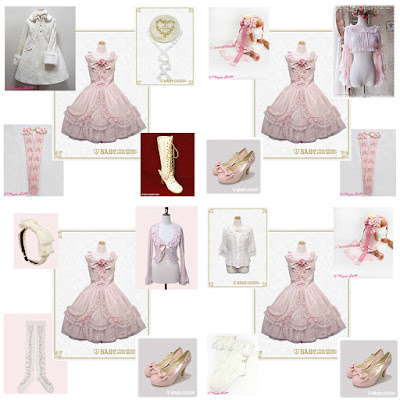 This lovely Baby JSK was chosen to be the OTT centrepiece of the wardrobe, though Dramatic Rose above could also fill that role. So most of these outfits, by virtue of the dress itself, are on the fancier end of the scale. I thought choosing a solid colour piece for the OTT option gave the most coording possibilities while still allowing the hypothetical wardrobe owner to have a "wow" piece. I toyed with the idea of making the OTT piece OTT in every way, like a princess-sleeve AP onepiece, but decided I wanted to prioritise versatility. Sweetie Violet is another AP love of mine that would never look good on me, so here it is. In this wardrobe lavender plays second fiddle to pink, but I felt having both kept the wardrobe more interesting, even if it meant the lavender coording options were a little more limited.I think it would also have been interesting to pull together a cute OTT look with the JSK and the Infanta princess sleeve blouse, and something causal with that same blouse with the princess sleeve part detached, but I do like the range showing the the four outfits above. I guess the fact that there are still more outfits I could have made without getting repetitive does prove that the wardrobe works! 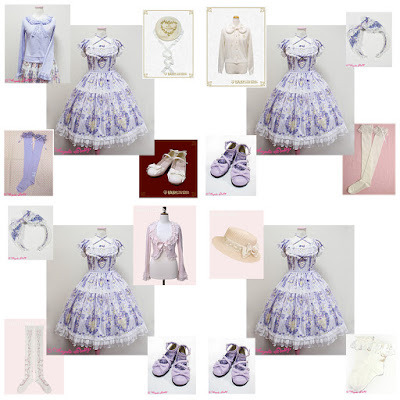 I only ended up choosing a single onepiece for this wardrobe, and even chose the matching headbow for it. I felt the headbow worked well with Sweetie Violet as well, and it gave a little extra something to this dress to be able to do matchy-matchy outfits. I know full sets are somewhat unoriginal but I did like being able to have a little bit of that going on in this wardrobe. There's just something so very quintessentially lolita about matching sets that even I, lover of versatility that I am, really enjoy. 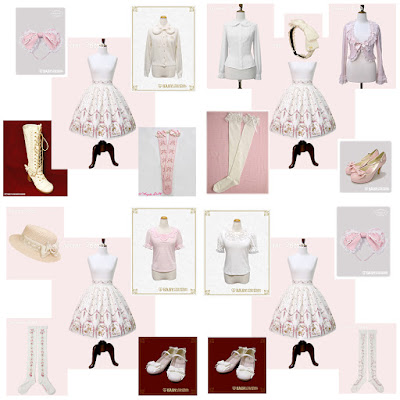 For a slight change of pace, the first skirt in this wardrobe is a sweet Innocent World print, as opposed to all the other prints which are slightly more classic leaning Angelic Pretty. It is also probably the most casual main piece in the whole collection because the cut is incredibly simple despite the print, and that casualness is reflected in the outfits. 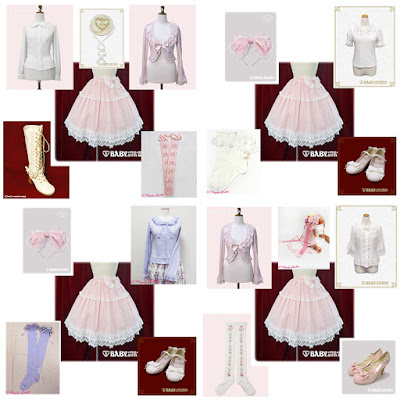 The last main piece in the wardrobe is another solid, again from BTSSB. It allows for a range of looks as it's neither particularly dressy nor causal, and also gives an opportunity to work with the lavender pieces again. At this point in the post I don't have much more to say about this set of outfits specifically, except that I really think this skirt is super adorable!

After having made the outfits, I have to say I was really pleased with how well this wardrobe worked. There's certainly an outfit there for any occasion for a quick run to the grocery store to a fancy tea party, in any season. I would possibly make a few tweaks if I were to do it over but, speaking generally I was very pleased with the versatility of this hypothetical lolita capsule wardrobe.
Posted by Roli at 5:41 pm