It’s funny to think that in all the time I’ve been a lolita – which is coming onto five years now – I have not once ordered from Closetchild. Until now, that is.

Two items that were on my list of wardrobe goals came up for sale at the same time, and I decided to go for it. I also eyed off a number of other things (cutsews and OTKS, mostly) but in the end kept my purchases to a minimum and got only what I needed. So, which items where these from my list? An ivory short sleeved bolero and a pair of black wristcuffs.

I’ll be honest, after shipping costs kicked in I had a moment of regret for buying these. But even though it’s harder to get excited about basics they are things I needed for my wardrobe, and I am pretty proud of myself for not buying additional items to make myself feel better about the cost of shipping.

Overall I found Closetchild pretty straightforward to order from – their how-to guide for international customers was handy and everything was simple enough. I ordered and paid on 19 March, received an email that the order was received on the 20th, it shipped on the 22nd and arrived on the 27th. And yes, I am aware this review is a bit late but hey, better late than never. All in all Closetchild provided a good service and I will happily buy from them again.

Onto the items! First of all I got Innocent World's Ribbon and Pearl Short Bolero in beige, which is super pretty. 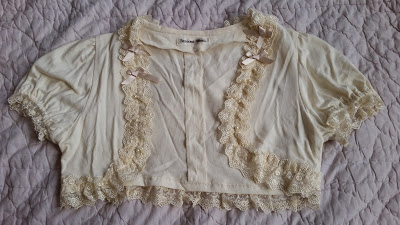 It is unfortunately too small on me - it fits, but it looks too small. I am going to hang onto it to see if it gets better as I lose weight or if it's just a problem with my big Western shoulders. It's a really lovely bolero though, the details are just gorgeous. And it is NWT! 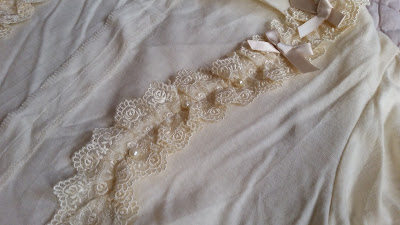 Then I also got some AatP "wristcuffs". Why the quote marks? Because they're actually sock toppers...

And it's entirely my fault! The listing said sock toppers, but I wasn't really aware they were a thing, and given how Closetchild listings have been a bit haphazard lately I assumed it was a case of mislabelling or bad translation. But it wasn't, and so now I own some sock toppers and don't really know what to do with them... 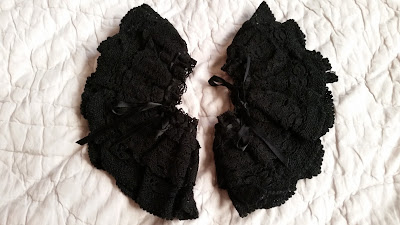 So all in all, despite the experience of ordering being fine I'm not all that excited about my actual purchases. But ah well, you win some, you lose some. And at least now I have ordered from Closetchild so I'll be more comfortable doing so in future if something I want pops up.
Posted by Roli at 12:18 pm