Lolita 52: Impulse buys that were totally worth it; and, Wardrobe blunders! Things I bought that I ended up regretting

I am once again lumping two of the Lolita 52 topics together as I don’t really have much to say on either. Though a few of my lolita purchases have been a bit impulsive, nothing really stands out as having been truly impulsive and then “totally worth it”. Similarly, though I’ve bought many things that I’ve then had to sell on, again nothing really stands out as a regret.

I think it’s commonly accepted that lolita, being as it is for most of us in the West a fashion that you tend to buy for online, there tends to be a lot of trial and error; things match or don’t, fit or don’t, are well made or not. Impulse and regret are part and parcel of it. Though it would be nice to have a story about that one thing that I bought on a whim which turned out amazing, overall I think I’m lucky to not have any grand stories of surprise happiness or regret in my lolita wardrobe. 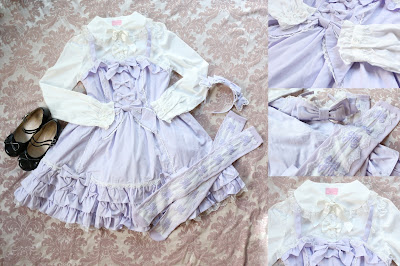 Angelic Pretty's Twinkle Doll special set was something I bought and basically immediately sold, but I made my money back so no regrets!


Do you have any stories of things you were happily surprised with, or that you ended up regretting?
Posted by Roli at 6:24 pm