Lolita 52: Combining other fashions with lolita

For the first interpretation of the topic the short answer is I'm all for it! Getting creative with fashion, any fashion, is awesome and if you can combine two styles you love into one outfit then that's awesome. At the same time, however, sometimes things don't work well together so I also think that there's no need to force things together into an ungodly whole unless it's something you get pleasure out of doing. Often the styles that produce the best outfits when combined with lolita are fashions with more thematic elements than structural ones, such as fairy kei, Western Goth or creepy cute. It's fairly simple to carry a theme or colour scheme over into a lolita silhouette but harder to mesh the lolita shape with something that has an equally distinctive outline such as meshing traditional Japanese clothing with lolita for to create wa lolita; it can be done, but often isn't done too well.

Personally, the only real mash-up of another fashion I've done with lolita is steampunk. Now, before you imagine a horror of cogs and cheap corsets know that I am, as much as one can be, as very practical person when it comes to steampunk. I hate when people just stick a cog on something and all it done. Whenever I do steampunk, which to be completely honest is only really ever for photoshoots or events, I try to make sure that the outfits make at least a little sense and convey a certain sense of character. And as such, the Victorian-esque aesthetic some lolita clothes can have really lends itself well to combining with my personal steampunk aesthetic. 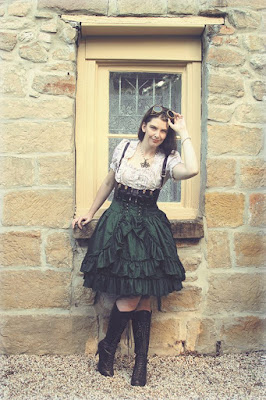 The photo above (which was taken, and harness made, by my lovely boyfriend James aka The Enthusiast) is my favourite lolita x steampunk look because I think it melds both together really well. It fits better into the steampunk aesthetic than the lolita one but I don't think it is un-lolita at all. The silhouette and modesty are both still there, just the accessories are different.

I also tend to use my lolita items, particularly blouses, in steampunk looks as well, like in the picture below, which is again credit to The Enthusiast. This is my dark green F+F blouse. 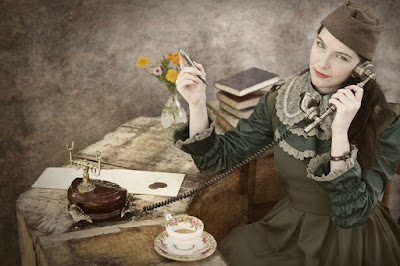 So that's how I combine other fashions with lolita. Do you ever merge another style into our lolita fashion or do you prefer to keep things separate?
Posted by Roli at 2:32 pm