On November 15, 2013 [does this sound like the opening to a vintage murder mystery, or what?] I won a $150 voucher for Lyris Design. So I commissioned a steampunk vest and wanted to review the process and the product for my readers. I shall do so in timeline form, because I feel like it and because otherwise this could potentially get very confusing...

15-16 November. Giveaway winner [haha me!] was announced on the Lyris Design facebook page and the owner, Carly, sent me a nice message explaining that the voucher was valid for one year, and to let her know what kind of thing I would like to have custom made. I messaged back with two different ideas - a skirt and a vest. Since the vest is what I ended up getting, that's what we'll focus on. It's a variation of this 1898 jacket from what is apparently a tennis outfit, basically nixing the sleeves in favour of tiny cap sleeves. 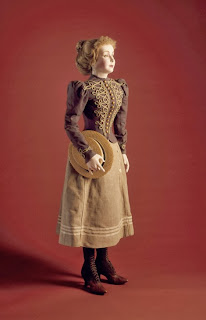 17 November. Carly got back to me with a few more questions so she could give me a quote, I replied, and she quoted me $280 for the vest, which meant with the voucher I would be paying $130.

I should mention here that normally I wouldn't commission something like this. I think the price is really reasonable, especially considering all the trimming and the fact that the price included posting me not one, not two, but three calico mock ups to test the fit, but I normally veer away from spending this much on a single item of clothing. As such, this is actually the first thing that's ever been tailor made for me [other than stuff I've made myself or that my mum has done!] so, though my experience with Lyris Design was super positive, it's still experience one of one with custom made items. Not that it really affects my opinion or changes my awesome experience, but I am just putting it out there.

27 November. Right on the day I was meant to get internet back Carly sent me links to a bunch of different trim and button options to choose from.

1-3 December. When I finally got back online and checked everything out I told Carly which trim and buttons I preferred. She confirmed my choices and checked my address to send out the mock-up and gave me a list of things to check when I received it.

9-10 December. I got the mock up on the 9th, complete with a handwritten note on some lovely paper and fabric samples for the vest and it's lining. James took some photos for me on the 10th to show Carly the fit and I messaged back with those and a description. It was a bit tight across the bust, I couldn't raise my arms in the sleeves [and also wanted to make them smaller for aesthetic reasons] and it was a bit large around the hips, but the length, waist and neckline were perfect.

11 December. Carly sent back some follow up questions and said she would do a second mock-up ASAP to ensure we got the fit right.

18 December. Shhhh... so it took me ages to reply! I have a bad habit of ignoring messages when things get a bit hectic, so it took me a while to give Carly the information she needed. I also apologised and said I totally understood if she wanted to leave it until after Christmas because of my delay.

2 January. Just when, after all the Christmas and New Years kerfuffle died down, I was thinking that I should send a follow up message sometime soon Carly messages saying she's sent off the second mock-up.

8 January. I got the new mock-up and it's a much better fit all around except there's a bit of extra fabric around the armhole. I also wanted the sleeves to be a bit shorter again, but Carly had definitely tweaked the pattern to fit me a lot better.

12-14 January. It was a really busy week so I hadn't replied back with photos when on the 12th I get a nice message from Carly just checking I'd gotten the mock-up okay. It was perfect timing, since I was planning on messaging her anyway so I quickly replied with more pictures and a description. We discussed what needed adjusting and Carly said she'd get to work on a third mock-up.

18 January. Carly messaged to let me know she had finished the newest calico and would send it on Monday [this was a Saturday] and apologised for not sending it yesterday. Any fellow Aussies reading this will remember the horrible heatwave we were having then so I didn't mind at all.

23-25 January. Got the third mock-up on the 23rd and it was pretty damn perfect. We exchanged a few messages with a final confirmation, Carly mentioned that she may not get to my vest until the end of the week as she is finishing up pieces for a fashion show and I said it's not a problem. Angeline Bubsy was walking for Lyris in the fashion show, so I was keen to see it go off well!

6 February. Carly sent me a picture of the fabric with the buttons and trim laid out on it [and I should mention that this photo is probably the most accurate to colour in this post] to confirm it's all fine before starting the trim. She managed to get a pretty good colour match with the braid and buttons! I got details for paying the balance and Carly said it should be finished by the end of the weekend. 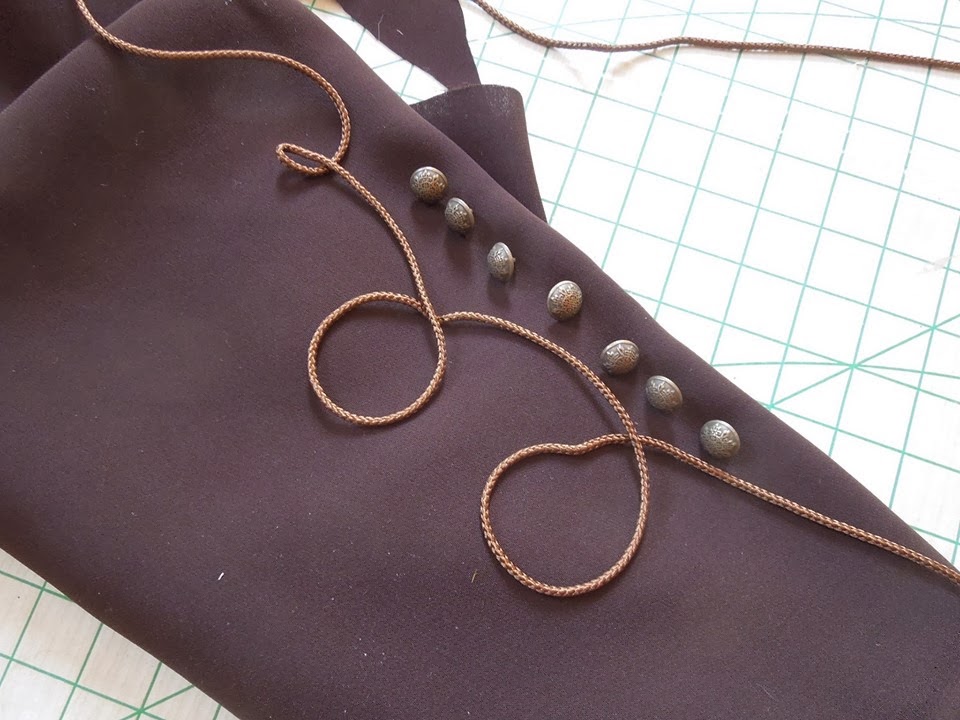 8 February. I pay, send a message saying I've paid and Carly tells me she's finished one side of the cording. This is where I start getting rather excited!

10 February. I log onto facebook and what is at the top of my newsfeed but a picture of my awesome vest that Carly posted on her page! She also sent me a message with the picture and tells me it has been posted and to let her know if there are any issues. I sent back a really enthusiastic message because she did a really, really fantastic job and I couldn't wait to have it in my hot little hand! 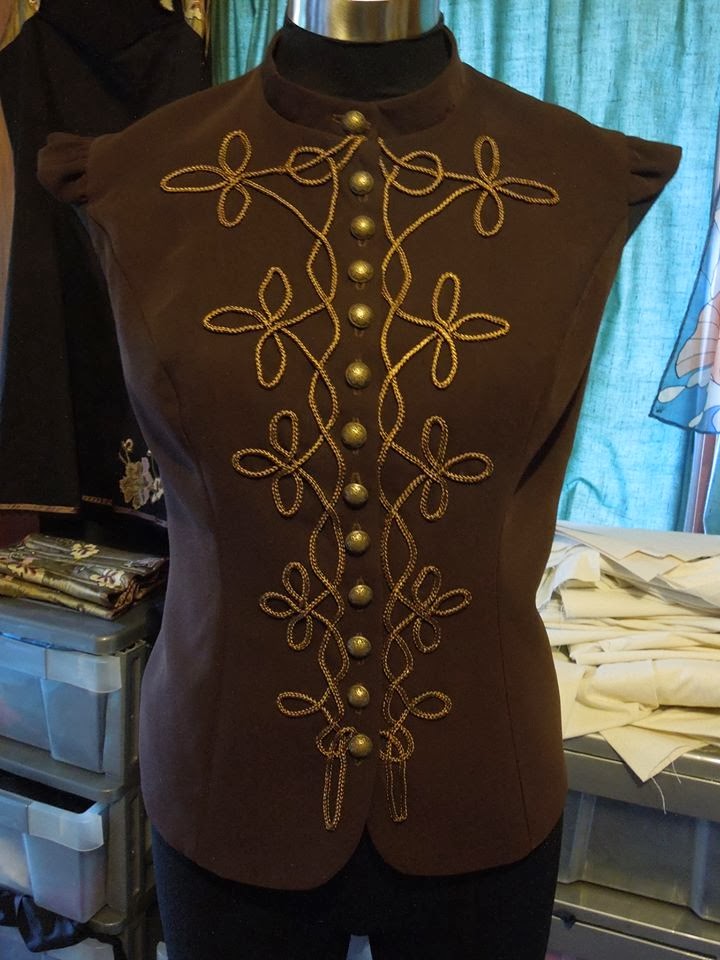 13 February. It arrives! I was still dozing the the morning when James comes into our room going "package!" so I managed to wake up for it. Unwrapping pictures follow, and a first thing in the morning worn photo featuring my "I just did up 13 buttons, and I've only been awake ten minutes, I am proud of my dexterity" face. 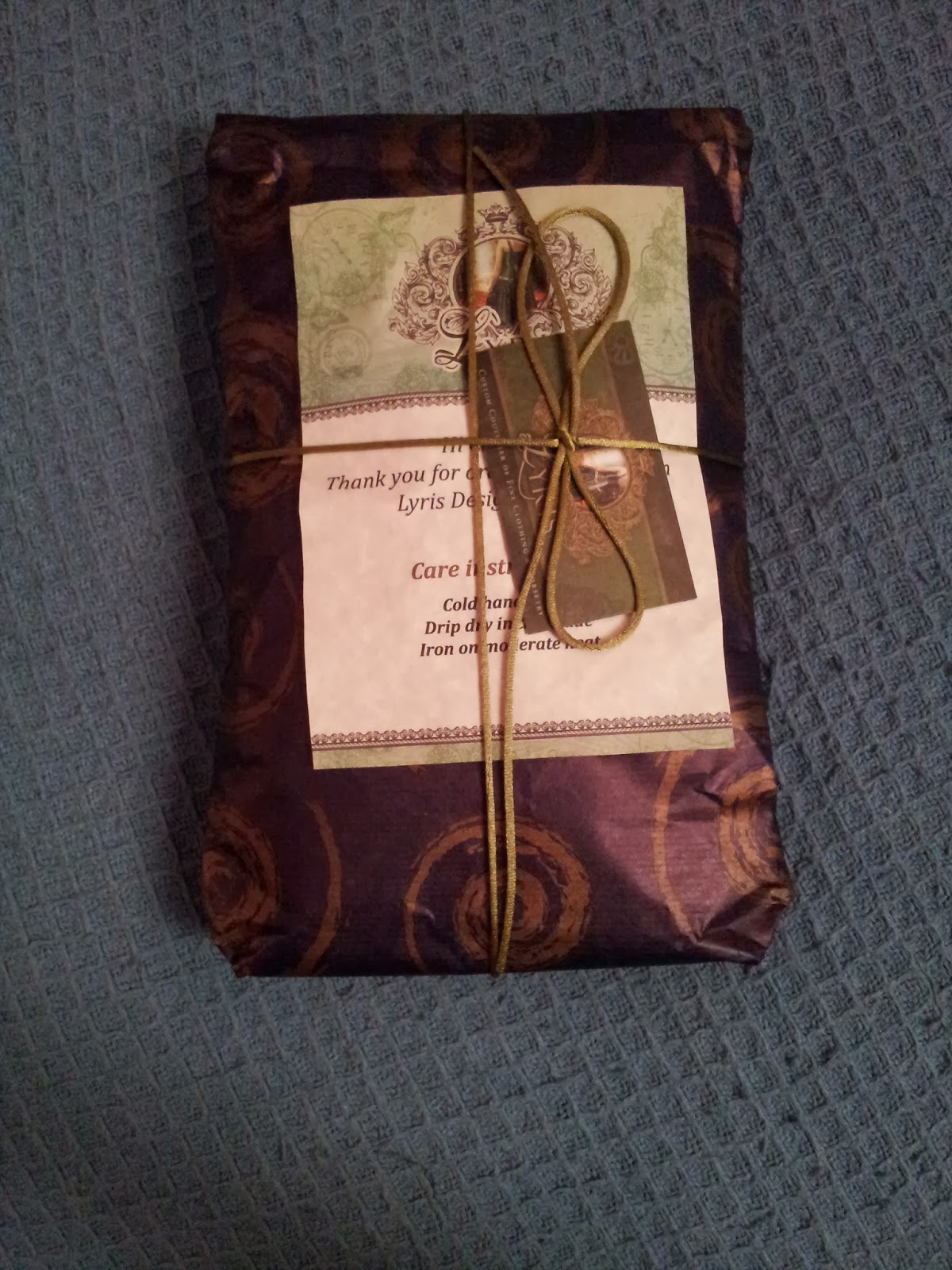 This cute little parcel came to me inside a regular padded post satchel. The note was personalised and contained care instructions, and was printed on a nice paper. 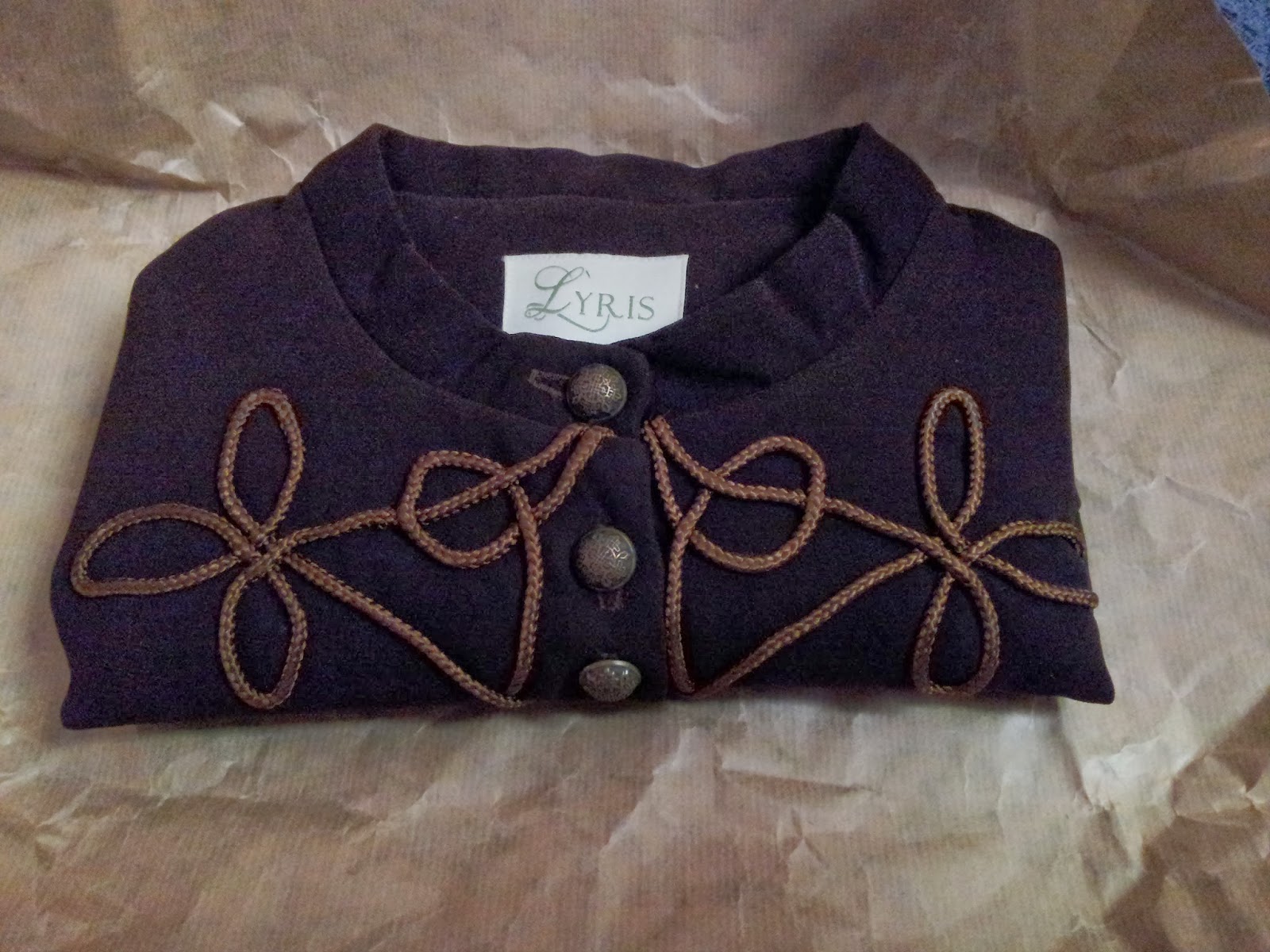 So I may have let out inarticulate noises of joy when I unwrapped it. My pictures don't show how lovely this is. The workmanship is fantastic and the fabrics Carly chose are great. This is probably the best made piece of clothing I own, and I own a lot of clothing! If I were to nitpick there are a couple of places where the trimming isn't completely symmetrical, and there's one loose thread in one buttonhole that catches a bit, but like I said, that's being nitpicky. It fits wonderfully, is exactly what I asked for and is extremely well made. 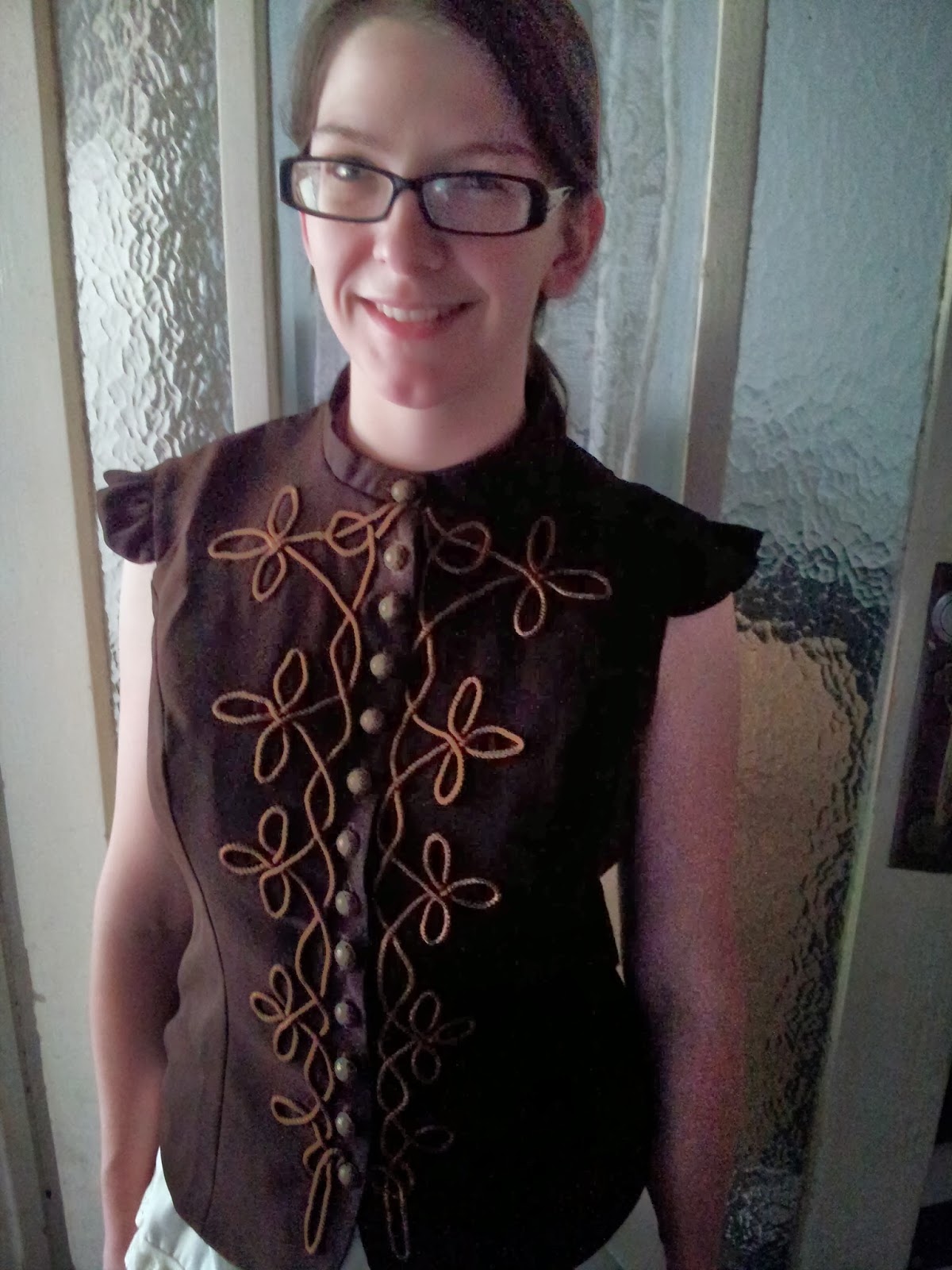 So, long story short, Carly was wonderful to work with and very attentive to detail, making sure that the fit was perfect and checking that I was happy with everything before proceeding. From start to finish this commission took three months but given that I caused some delays by slow responses and there was all the joys of Christmas in the time period as well I think that that is quite a reasonable turnaround time. As far as pricing goes I think it was super reasonable, especially since she didn't charge postage on top and she sent me four packages overall! The amount of fiddly work that would go into the trim and even all the buttons of this is, well, a lot and even though I'm sure she's a very experienced pattern maker there was a lot of time spent getting the pattern right for me.

Super long story short: Lyris Design is awesome, if you want something custom made go to her!
Posted by Roli at 8:02 pm