Again with the Bodyline reviews, I know, I know. This one will be short and sweet. I decided to take advantage of their recent sale and free air shipping campaign to try their new chiffon blouse I had been lusting after ever since it popped up on their Rakuten site. In the end I got that blouse in two colours, another blouse for some old-school looks and shoots I'm planning, some new socks and we also got some cheap accessories from the sale for the model wardrobe. 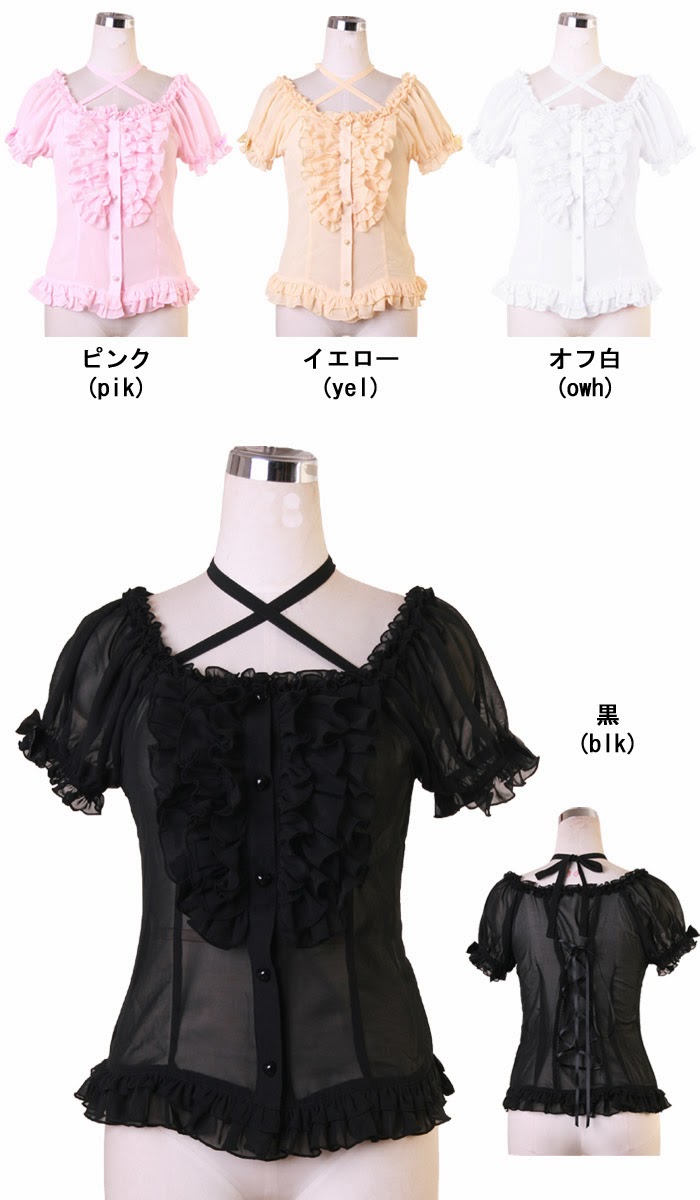 This is the blouse that incited the lust - I have honestly been waiting for Bodyline to do something in chiffon since the trend started picking up and they finally have! Since white was sold out in 2L and I don't wear yellow, I got this in pink and black. Again, it's one of those awkward Bodyline moments where the bust is to small and the waist is too large, but normally things like that average out for me. However, it ended up fitting perfectly across the bust and the corset lacing in the back means it will fits my waist even when I loose more weight. And I really, really, REALLY love them.

Overall this blouse is quite nice, all the ruffles have rolled hems so there are no raw edges, the sleeves have a decent amount of elastic and, most importantly, despite the fabric being polyester it's not a noticeably "sweaty" fabric. Obviously, it is sheer but a camisole underneath takes care of that. I took a few shots of the pink one to show some of the details. The first photo is most accurate to colour, it's a warm toned pink, but I had to use flash to show some of the details. As for the black version, it's identical but black ^__^ 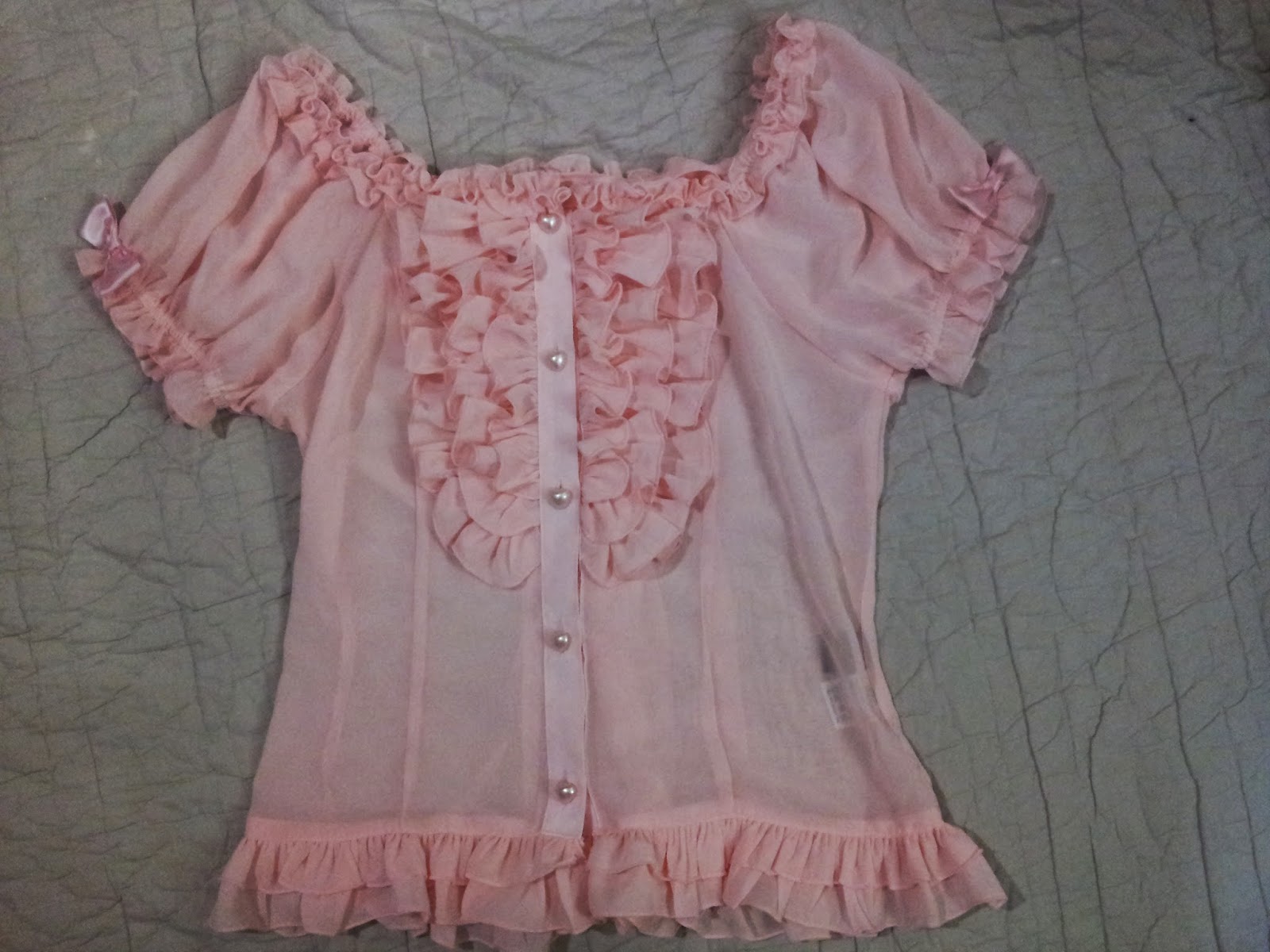 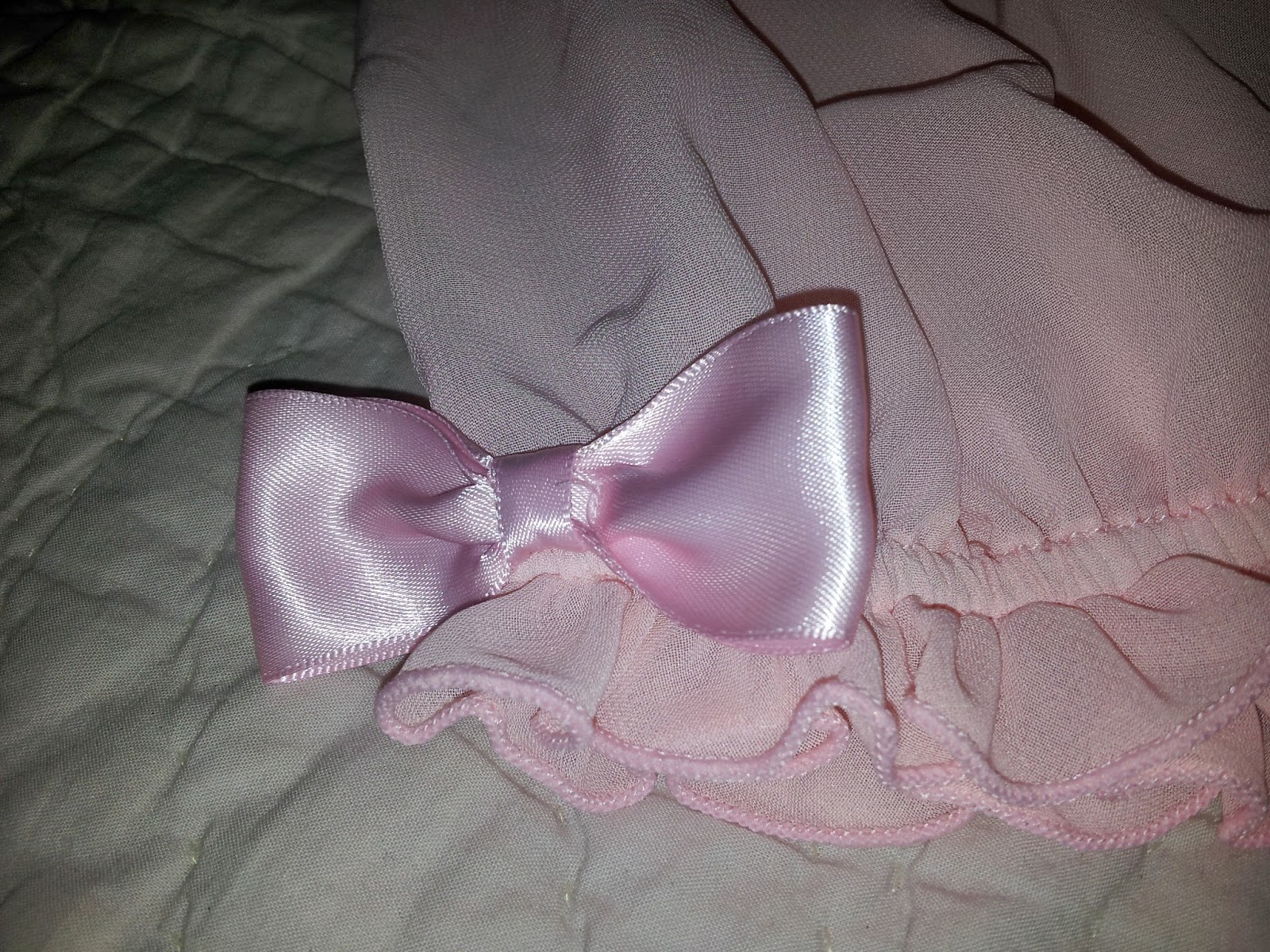 Bow on the sleeve. 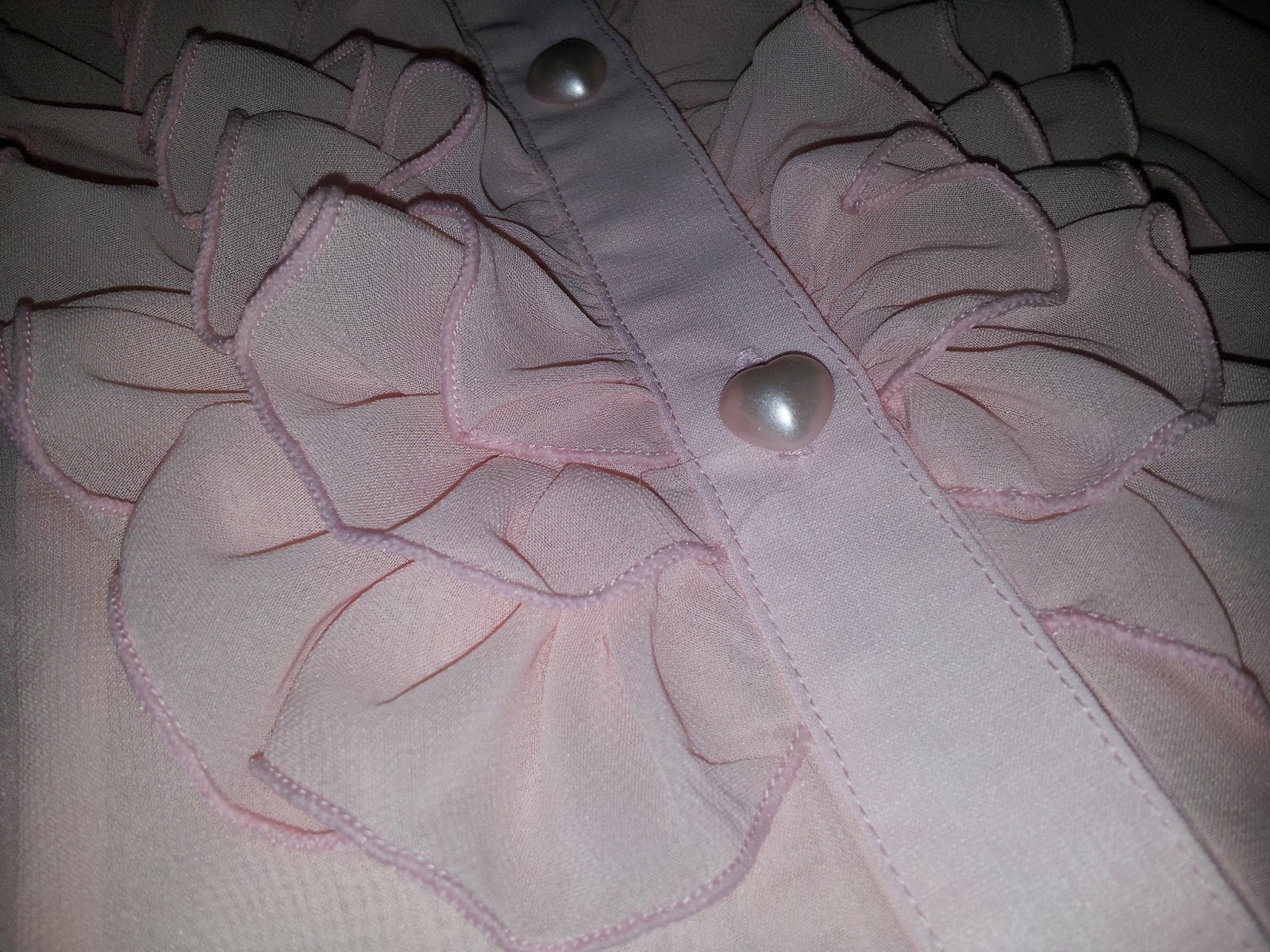 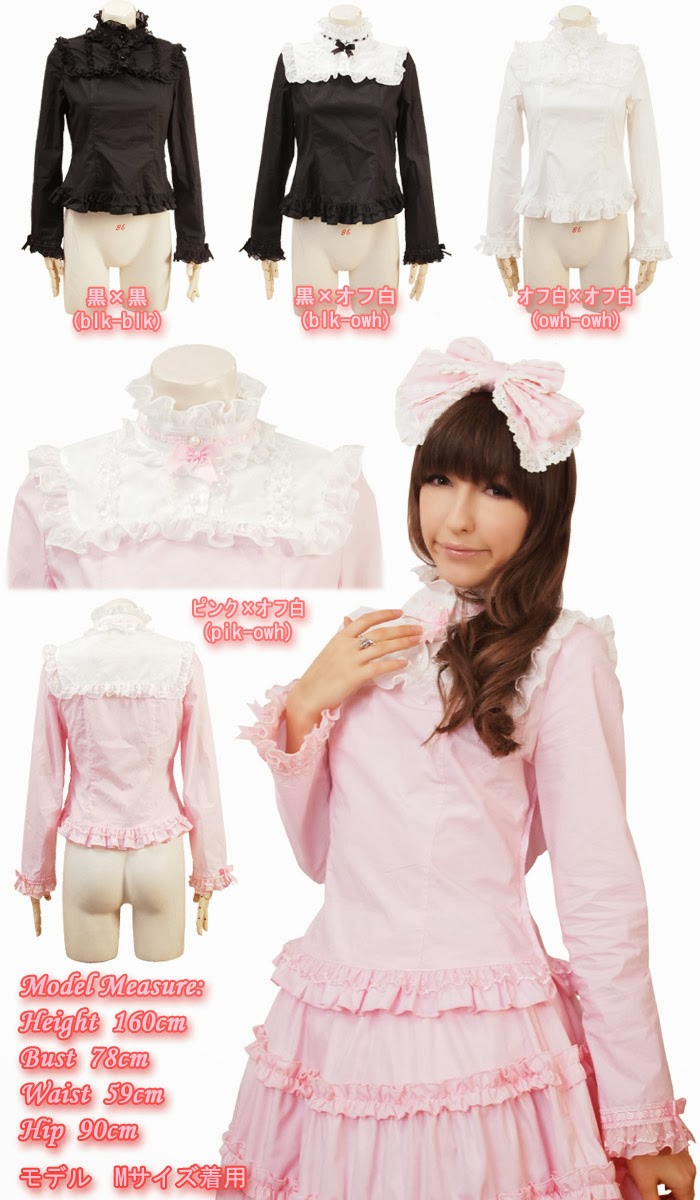 This blouse has been something I've looked at every time when placing an order, but I think it may have gone down in price or something, because this time it was added to the cart instead of being ignored. I had the oddest problem with this blouse though - it was really difficult, even after unbuttoning the front, to fit my head though! Also, the sleeves are a bit short but since I'm 169cm tall that's not really surprising. I'm smaller than the listed measurements, so it's big on me but I think it would fit up to what's listed no problems, though the neckline may be an issue if you have a thicker neck. As far as construction goes it is sturdy, and the fabric is their typical polyester and "others" which may get a bit sweaty in warm weather but is nice enough to look at and to the touch. I'm quite happy with it and have lots of coord ideas!

I only have one photo of it showing the laces on the bib as I know people like to know the quality of Bodyline's laces. Blogger kept rotating my other pictures so they were upside-down. Again, excuse the flash. 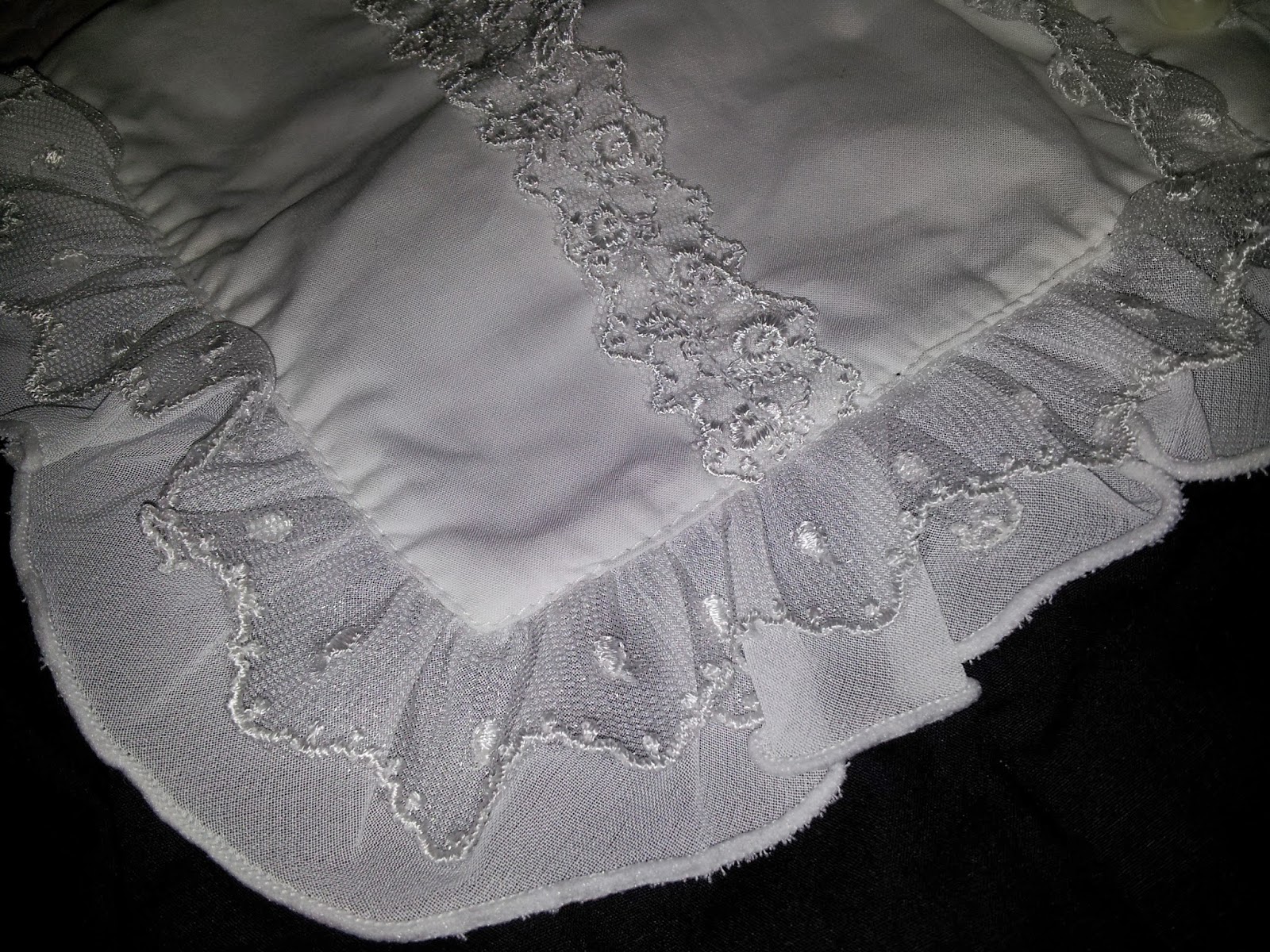 As for the socks, I don't even remember which ones they were, as Bodyline tends to have several very similar pairs of socks on the site at the same time. In any case, these are quite nice. The lace isn't spectacular, but they are cute and comfortable. However, though both pairs seemed to be under the knee socks on the site the white ones are shorter than the black pair so if you're on the taller side like I am perhaps look into their OTKs instead, because they may well end up as under the knees anyway!

As far as speed of order goes, I placed my order on the 10th and received it on the 20th, which I consider a very good turn around time. Of course, since Bodyline posts out on Tuesday's, ordering on a Monday helped with that sensation of speediness ^__^
Posted by Roli at 1:01 am