Art tights, how I love thee. I was really excited when I checked the Ophanim store in March because when I'd last looked there were less designs and they only came in one size and though I would fit, it would be a tight fit and I know myself well enough to never buy stockings that will be slightly too small, or I'll never wear them. But now there's a "large" size, and that makes me a happy panda. A happy panda who ordered the "Friendly Pigeon" tights in red. I'm trying to be good with new wardrobe additions and much as I adore the green I know I'd get more wear from a red pair, so red it is. 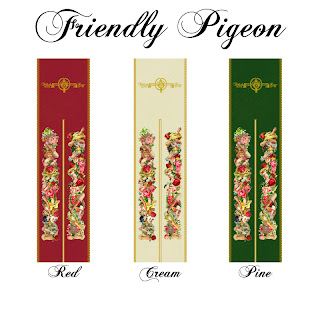 Are these not awesome?

There are lots of designs to choose from at Ophanim, most of them more suited for classic lolita or dolly kei and a handful of pastel sweet goodness. The store works on a pre-order basis with orders going to the printer on the first Monday of the month [so my order being placed on the last Tuesday of the month was good timing!] provided at least six orders have been placed. From then until the orders are shipped is expected to be about a month. Caro posted a picture of March's orders on facebook and tumblr on May 9th, so if that's average the turnaround time is slightly longer than a month bur still closer to one than two.

However, we hit a snag with my order and towards the end of May when I was starting to check the mailbox religiously I got an email from Caro on the 29th saying that my tights had a printing flaw that meant the design was cut off at the side seam, and there were also gaps in the red print around the crotch that left white patches. She offered me three options: a full refund including shipping, getting my tights at half price or to have the tights reprinted in the next lot. After a bit of thought I asked for the half refund, because, having had time to think about it I'd become uncertain that printed tights would work on me. I'll always love them on other people, but maybe not on me so I figured it was better to have an imperfect but cheaper pair to test the waters with.

After that snag my tights came on the 26th of June and I adore them. The design is cut off slightly, but it's hardly noticeable. The more obvious flaw is the white at the crotch, but it's the crotch and not visible so I don't care but I would if I had been paying full price. The design is nice and crisp and the colours are really vibrant. As they are printed on white tights the colours do fade when worn but they still look good. However, if you're looking to buy these be aware that you end up with more a dark pink than a rich red when worn. But it's a very, very awesome dark pink. As far as fit and quality of the tights themselves, they are great. They feel very sturdy and very soft and are really comfortable to wear. The waistband is not as forgiving as those on other plus-size tights I own, so they may be uncomfortable if you're at the upper end of the weight scale provided. All in all they are great tights, and even though prices were recently upped to $27 a pair they are definitely worth it. 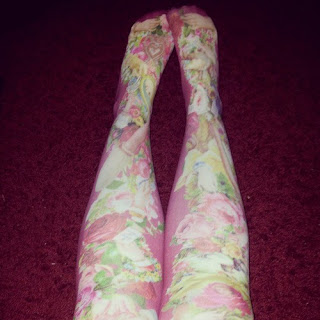 Colours are slightly more vibrant in real life, phone camera flash blew this out a bit ^__^

Now, I tend to be a bit impatient with waiting for things ordered online, so the fact that even though my tights came from the printers at the beginning of May but I didn't hear about the flaws in mine until the end of the month was a little disappointing, but I think it's convention season over in the states so it's an understandable delay. After hearing my response they were shipped pretty quickly - according to the postage sticker they were sent off on the 6th of June. However, the delay in my tights because of the printing flaw aside, all in all it's an extremely good turnaround time when you consider that it operates on a pre-order basis, which really is the only feasible way to do this kind of thing until you reach a certain level of sales.

So, long story short the tights are great and I would definitely recommend buying some. It'll take a couple of months to get them [probably quicker if you're in the USA] but they are worth the wait. The only "flaw" is something with all printed tights - the design will stretch when worn on even the thinnest of legs. But on certain pairs of tights [the Prayer tights instantly come to mind] that won't be an issue at all because of the design. Also, the Ophanim tights are the cheapest printed tights I've come across so really, I can't recommend them enough.
Posted by Roli at 10:37 am