Recently I found the mojo to do a bit of crafting again. Nothing too mind-blowing but a few little projects I'm rather pleased with. 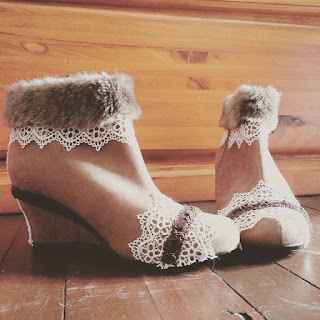 First of all, I decorated a pair of plain brown suede ankle boots we were going to get rid of. I was going for something kind of mori-girl, kind of steampunk, and I think these could go either way. Now I just have to figure out an outfit they would go with! 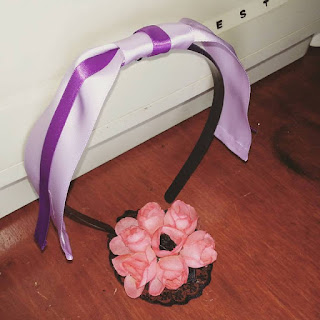 I also recently whipped up some loltia hair accessories to go with some pieces that I don't have much to match with. Any guesses what those pieces are?

I'm quite pleased with the floral two-way clip but not so pleased with the headbow. It looks okay worn but it could be better. Maybe I'll just bite the bullet and buy myself a lavender headbow! 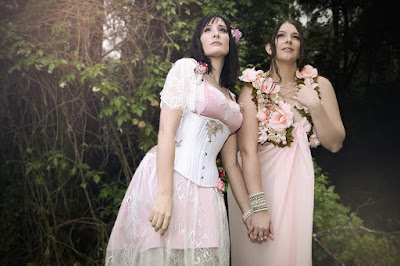 And I also just realised another crafting project I never shared... the flower vest I'm wearing in the photo above! James and I were organising a weekend of shooting with Angie, she suggested for one look her beautiful fairy-like outfit and since I'm very into that sort of thing I asked if she wouldn't mind making it a double shoot. She didn't mind, so I had to whip together something pink and fairy. I was so incredibly pleased with my vest... I think it also covers the fact that my dress is just a wrapped, tied and pinned piece of chiffon pretty well ^__^

Credits for the above photo:
Photographer: The Enthusiast
Other model: Angeline Bubsy
Angie's outfit: Lyris Design

Have you crafted anything, big or small, recently?
Posted by Roli at 2:25 pm