Guro lolita (and much more) photoshoot at an abandoned asylum

Last month I got to be one of three photographers along with my boyfriend James on a group shoot at an abandoned mental asylum, and I had a great day and took lots of cool shots. The theme was "gore" and to my surprise and delight one of the models showed up in guro lolita! Since this was such an interesting day I was always going to post about it briefly here but it makes me really happy that it's (partially) "on theme" for this blog anyway!

So I'm going to share a shot of each main look I did, and talk a little bit about the day as I go. If you're interested in seeing all my photos, please visit my facebook page for the complete album. I have credited the models in each photo description, and have linked to their public profiles (where applicable).

The other photographers on the day were my boyfriend James aka The Enthusiast and Wulf Photography, who was the primary organiser and also responsible for doing/supplying/teaching SPFX on the day.

And, I guess, trigger warning...this was a gore shoot. There is a lot of fake blood in the below photos, and some SPFX wounds. 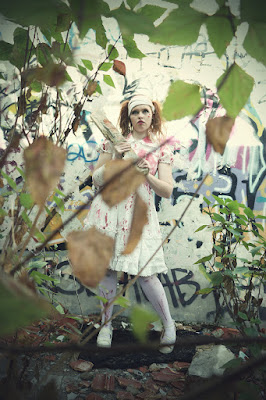 It should surprise none of my readers that the first model I shot with was the guro lolita! People were arriving in dribs and drabs (to be fair, this location was a twenty minute bush walk from the nearest parking) and were also still applying make-up and costume when we got there, so when Ash walked up fully ready it was great. She was also fantastic to work with - the first shots I have of her she was literally climbing up the walls! And I didn't ask for it! 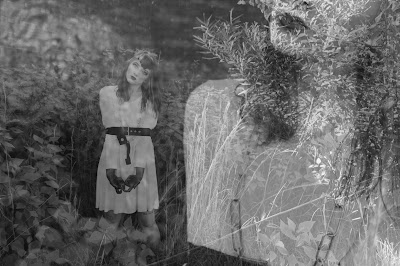 Next James and I shot with Natalie together. Going into this shoot I had only one idea I really wanted to execute; a girl in white near the overgrown wall shot as a black and white double exposure. And I got it perfectly! Natalie was very good holding the exact pose and expression for me while I shot of whole lot of compositions and angles to layer together. 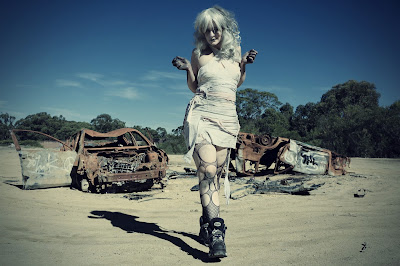 By the time we got back to the base camp area after shooting Natalie everyone had arrived. I'm not quite sure how it happened but the next person I got to shoot with was Rachel. One fantastic thing about this locations is that it has a whole range of locations within it - overgrown walls, destroyed and graffiti covered buildings and even a stretch of sandy earth with rusted car bodies. And with Rachel's cool, kind of post-apocalytpic grunge look I thought the cars worked well! For this look with her I just asked her to walk towards me again and again and again. Most of my shots were bad, but the ones that were good were very very good.

I also got gravel down my pants from hunkering down ever lower as she walked closer. The things we do for art. 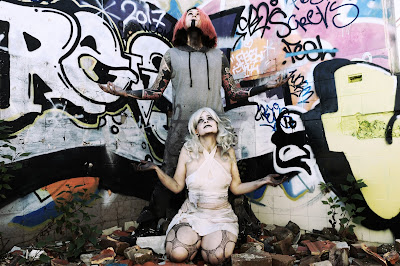 Next up I grabbed Dan as well and did some couple shots with him and Rachel. This one was my absolute favourite of them together, and it's kind of funny because between shots we were goofing off, I was complaining about my gravelly butt, and I was giving ridiculously pretentious direction. But you wouldn't guess it from the final shots! 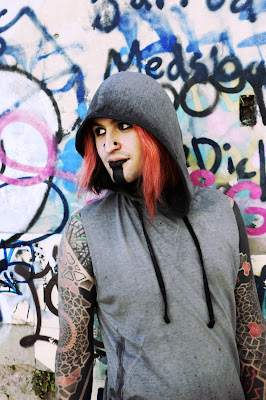 And of course, I had to get some shots of Dan on his own. Like Rachel his look was way for post -apocalyptic than gorey, so I went in a bit of a fashion-y direction for a couple of simple top-half shots.

This seems like an appropriate time to say that one of the best things about this shoot was how wonderfully differently each model interpreted the theme of gore. As a photographer, I got to shoot a range of different looks and emotions throughout the day, which I loved. 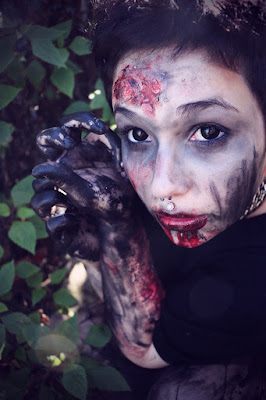 Then I got to work with Celeste, who was the goriest person so far! We focused on doing some very emotive close up shots, which I really enjoyed. The contacts she was wearing especially made it kind of eerie. 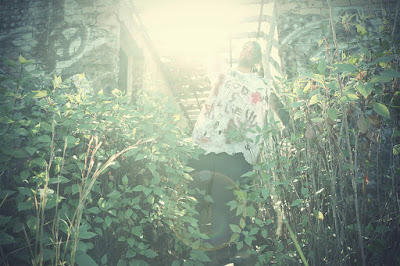 Would you believe that this shot of Jordan and the previous one of Celeste are at the exact same place? What a difference model and photographer positions makes! I really enjoyed getting to get in some super dramatic lens flare here, I love lens flare something fierce.

And here I segue into another thing I like about this day - we had two male models! Amateur modelling is so female dominated that it was kind of a surprise to have two guys show up for this one, but definitely a good one as once again it gives the photographers a lot more variety. 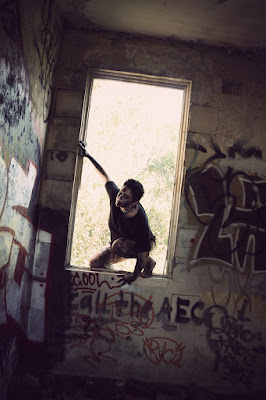 At this part of the day I was getting tired, but still wasn't done! As we all gathered at base camp I asked the models if anyone had a particular concept they had in mind but hadn't had a chance to shoot yet. And Celeste said she wanted to climb in a window. So climb she did!

I'm not sharing the adorable behind the scenes shots because there's just so many, but at this point a big white and black wolfhound and a mini wolfhound type dog showed up and started clamouring for attention at Celeste. Later it seemed like the dogs owners were in the area to teach a friend how to off-road 4WD and were letting their dogs out for a run around here. Both the owners and the dogs were super nice, and the doggos in particular made pretty much everyone super happy. 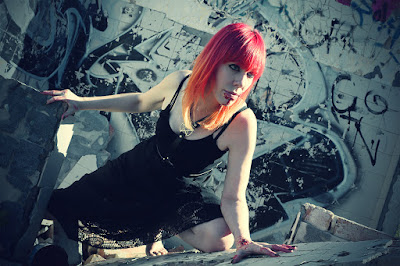 Next I shot with Keira. I had shot with her second, straight after Ash (James and I did a model switch) but I didn't like how those photos turned out in the end, so in terms of finished photos she's here in my timeline!

Also, you know how I mentioned that this location was a bit of a bushwalk in? Well, James and I drove Keira to the shoot with us (seeing as she's a friend ^__^) and she had the most ridiculous Snow White moment with a friendly little wallaby on the way in. The wallabies and kangaroos around here know that humans equal food and pats, but I wasn't expecting the ones in the bush to just come up and start nuzzling her hand in search of food! It was a really cute start to the day I ahve to say, and nearly everyone got to have a similar moment on the way in.

P.S. Oh my goodness, how Aussie does that paragraph read? Bushwalking and wallabies? I feel like such a stereotype... 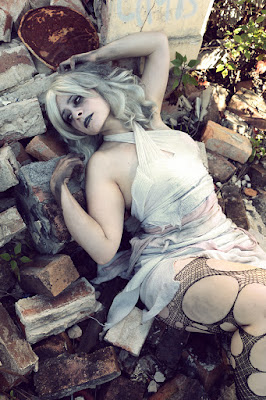 Rachel just happened to wander by at this point, so I grabbed her for a few more spontaneous shots. Gotta love it when models are wiling to lie on grimy bricks for you! 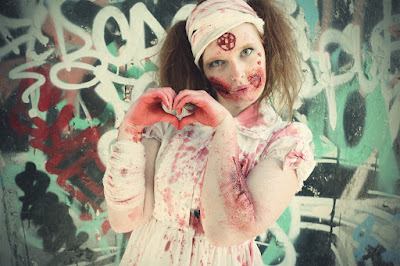 Then, as a last hurrah, I shot with Ash again, who now was a lot more gorey! I especially loved the pentagram on the forehead...

Throughout the day I also got a couple of random artsy shots of Keira and Natalie as well, and a cool one of Celeste and Storm  together but I figure this post is along enough as is so if you want to see more please check out the album on my facebook page! 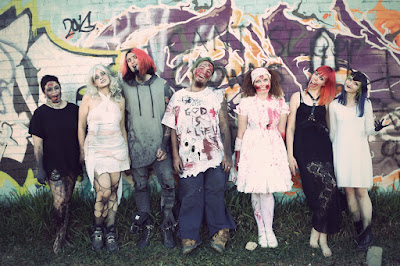 And I'm finishing off this rather long post with a group shots of the models! It was a really great, and super exhausting day.
Posted by Roli at 3:21 pm

Email ThisBlogThis!Share to TwitterShare to FacebookShare to Pinterest
Labels: photography