Clothing review time again! This time the purpose of the order was for James, not me... but I ended up having a few things in the cart at the end, and that's what we're reviewing here...

We placed our order on the 13th of August and after a few very quick and very polite emails confirming custom sizing [I mis-measured James's shoulders because I couldn't find the full measurement guide on their site that included where to measure shoulder width] waited only a few weeks until we got an email confirming shipping on September 2nd, which I think is very reasonable construction time for a made-to-order jacket, vest and two shirts. We got our package September 9th and I have to say, even though I am a bit annoyed at F+F's lack of shipping options [read; you don't get options] it is nice to have your items arrive so quickly. Anyhoo, onto the reviews!

And yes, before someone yells at me, I know there are no photos. There are no photos because a. If I had to take photos, this review would never be posted because I am feeling sick, busy and grumpy, b. The stock photos are quite accurate, and c. My descriptive powers are so awesome you will hallucinate a perfect image of what the items look like. I'm dead serious. 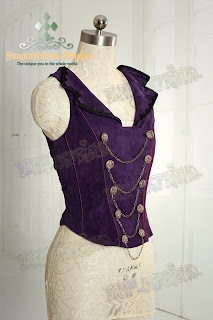 I used this vest in blue for my hypothetical gothic lolita wardrobe, and have been eyeing it off ever since. And when James decided her liked it too, it just had to be bought! As I was between sizes at the time of ordering I decided to go smaller rather than larger [I've been selling some of my lolita clothes on eBay lately because they're too big!] and got a Lady 85 but by the time it got here it was too big! Our crazy September workout and diet plan has really been paying off!

So unfortunately this lovely piece of work is going NWT onto eBay soon, but I can still give a few quick notes on it. The braid around the collar is not black but more a burgundy to match the stripes on the seams. In this colourway it's made of a lovely corduroy rather than plain velveteen and I think that gives it a fantastic extra layer of texture. It does seem to be made with boobs in mind though, I had a bit of room to spare in front, though that's also due to the whole thing being too big. All in all, it's rather nice. 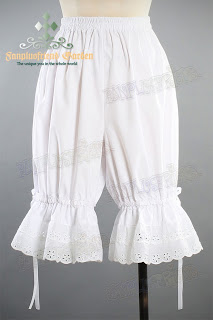 Both these and the next pair of bloomers were bought for an uberly epic photoshoot James and I are planning, and that's all I'm going to say for now ^__^

The first thing I noticed about these bloomers [other than how cute they are!] is that the lace the the bottom and the ribbon around the leg were both cream, not white. So the bloomers went straight into a tea-dye bath to even out the colours and they look super wonderful now! But that is kind of bad, though looking closely at the stock image now I can sort of see that the lace looks slightly off.

Other than the lace colour match these bloomers are fantastic. They are comfortable, well-made, soft and I think the laces used are really cute.They're also nice and long, so I may be trying a bit of an old-school peeking bloomers look sometime soon ^__^ 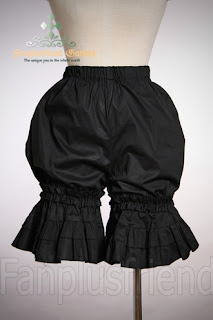 These bloomers are also rather cute, well-made and etcetera. I don't like them as much as the white ones, but they are definitely quite good! 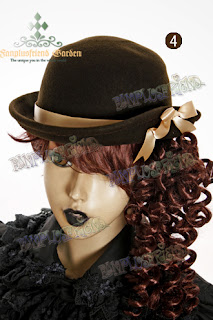 You've got to love not only how silly F+F's titles can be, but how charmingly mis-spelled they are at times! Also, their mannequin heads are kind of really scary...

Mocking of titles and stock photos aside, I should really confess here that I have a thing for full sized hats in lolita. I already have a black bowler hat, but it doesn't go with much, so I had to get a brown one. Had to. No choice in the matter. Had to.

This hat is a little on the small side. I think I have an average sized head and it fits me quite well, but a little tightly so keep that in mind if you have a big head, or a very small one.The colours are very accurate, and the felt of the hat is quite decent. Not phenomenal, but definitely nice. It holds its shape well, even after being a bit squished in the post. The only flaw with the hat is that the stitches holding the bow in place are kind of noticeable as the thread colour is slightly off the ribbon colour. It's not really noticeable when worn, but is when you're holding the hat in your hands.

We also bought a few pieces of jewellery, and have before, so here is my brief Fan Plus Friend jewellery review - it's all pretty darn good. Not the most phenomenal quality, but both design and construction are quite good for the price. Definitely better than the pieces you'd get at a place like Equip or Diva.

The Pros:
Lovely materials and sturdy construction, as always.
Fantastic communication, especially in picking up that something didn't see right in the measurements

The Neutrals:
Lack of shipping options!
Ample bust room in the vest, but that can be mostly attributed to the whole thing being a size too large.

The Cons:
Mismatched lace is mismatched.
Posted by Roli at 10:59 am